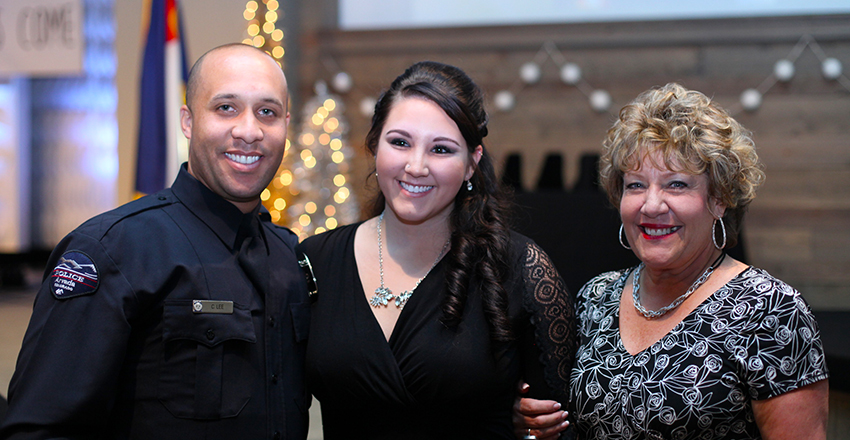 From Dream to Reality – Canaan’s Path to Success

Canaan is a young man whose hard work and years of continuous support from Mile High United Way have helped him along the path to self-sufficiency – and a life-long dream.

“I could not be more proud of my son,” Canaan’s father said. “The day he graduated, it felt like I was graduating.”

Today, Canaan has achieved his dream of becoming a police officer with the Arvada Police Department. After completing the 22-week training, Canaan received his police officer badge on Dec. 10, 2015, from the Jefferson County and Lakewood Police Department Combined Academy. During the ceremony, Canaan not only received his badge, but he also knelt down and proposed to his longtime girlfriend, Kelsey, to which she responded with a resounding yes!

“Mile High United Way gave me the support, courage, and strength I needed to reach my goals,“ Canaan said. “But the most important thing they gave me was love and a sense of community and belonging.”

Canaan’s success didn’t come by coincidence – it took years of hard work and the support of a community to help him accomplish his goals and become a self-sufficient adult. As an Arvada Police Officer, Canaan is now working to make great things happen for the community that helped him get to where he is today. But this couldn’t have happened without donors like you.

With your support, Mile High United Way creates opportunities for people like Canaan. Mile High United Way works to ensure children enter school prepared and ready to learn; children are reading at grade level by the end of third grade; youth graduate high school on-time and ready for post-secondary education; and individuals and families have the opportunity to progress toward self-sufficiency.

Every dollar and gift of time makes a difference for hundreds of thousands of people like Canaan in Metro Denver.